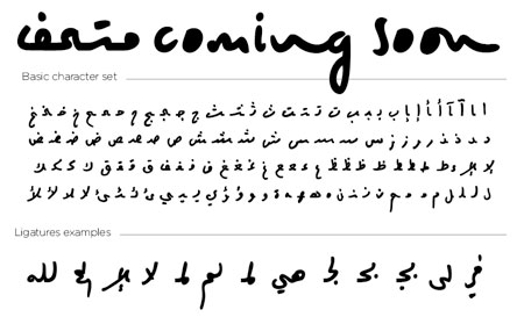 “One font I am particularly proud of and excited about is,” reports alumni Tarek Atrissi (MFAD ’03) “the custom display font for the Arab Museum of Modern Art, ‘Mathaf,’ a new museum opening today in Doha, Qatar, with its inaugural exhibition ‘Sajjil.’ The Arabic and Latin font is the result of months of intensive work, and is one of the main components in the visual identity and branding adopted for the museum.”

“The design process was very exciting and defined by experimentation. In the first phases of the project we explored all sort of manual lettering work. The focus was on finding the right formula to create a spontaneous writing style, while keeping in mind the challenge of matching the Arabic and Latin parts of the font to communicate the same spirit. There is basically nothing we did not try: Creating metallic brushes from Coca-Cola cans and writing with it; Graffiti writing on large newspaper sheets; Asking extended family to write quickly in charcoal pens; and looking in our archive for collected old Arabic newspapers which still used manual hand calligraphy for typesetting all headlines. Several design rounds made us finally use the outcome of a specific handwriting that filled in our stack of sketches. This material was scanned, digitized, and then developed and refined further to create the basis of the design. Twenty two rounds of presentations were needed to polish the final design. The final character set, particularly in Arabic, included a wide set of ligatures that allowed a more natural flow of the script.”