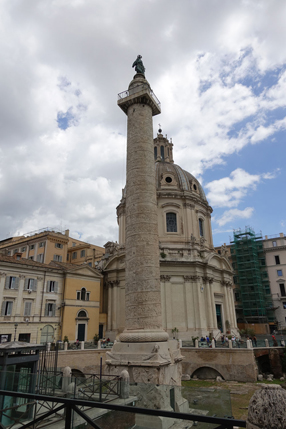 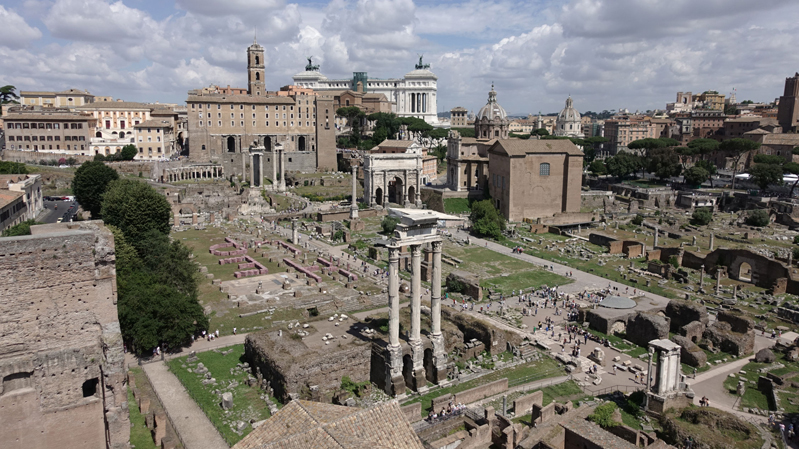 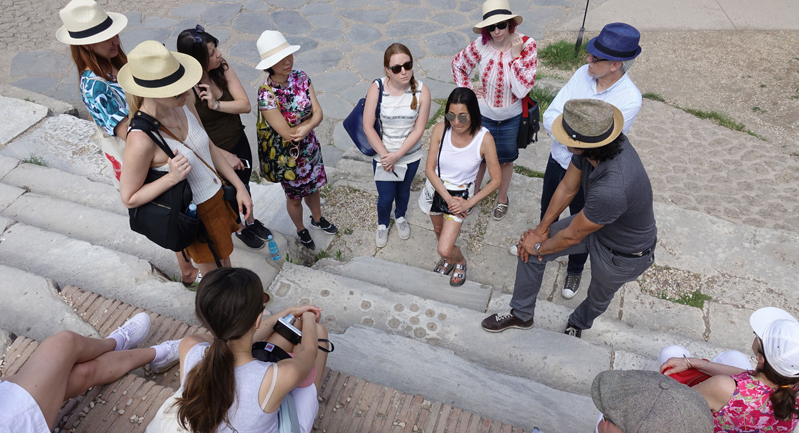 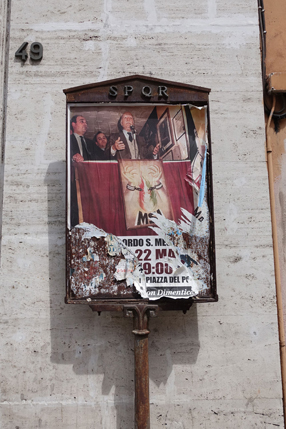 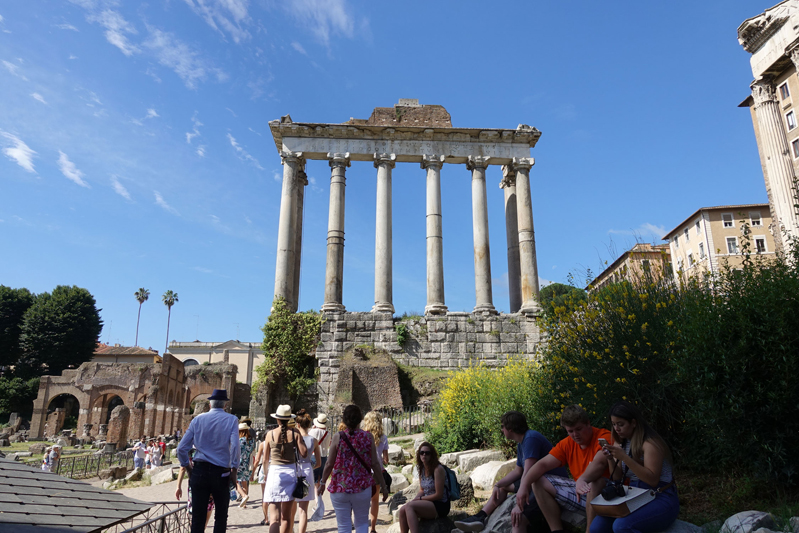 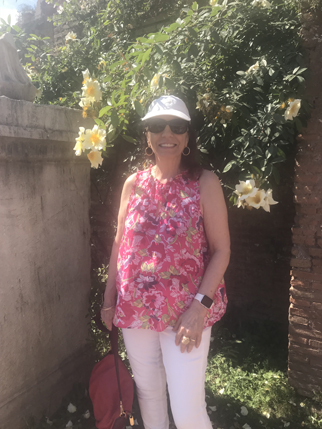 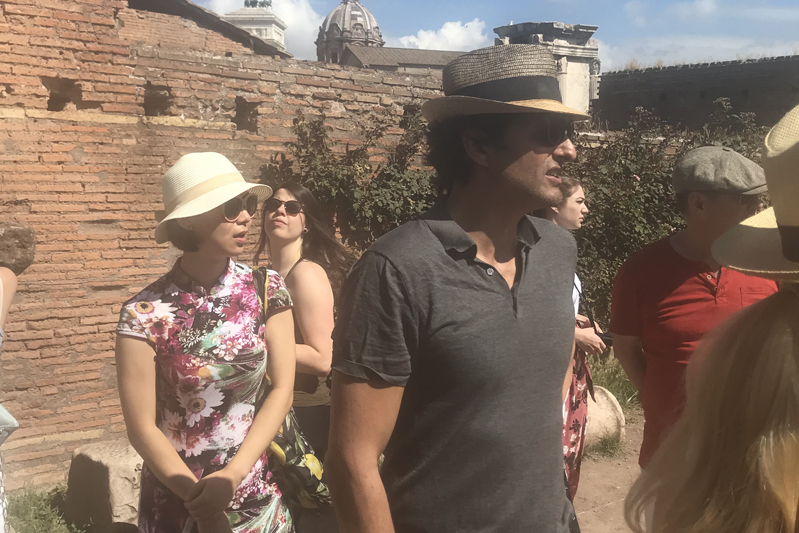 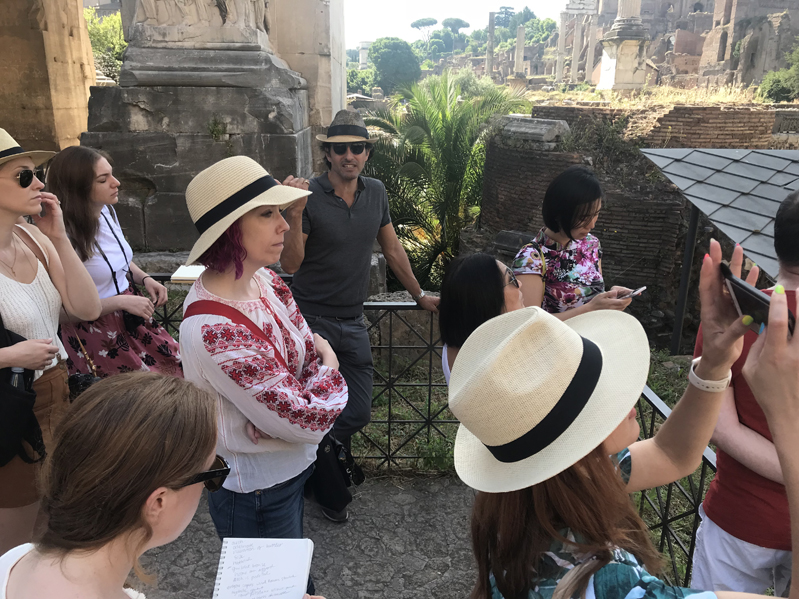 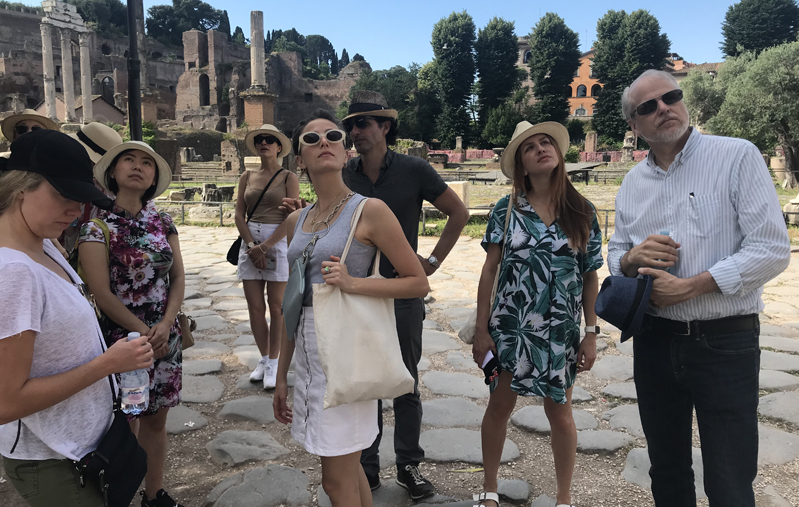 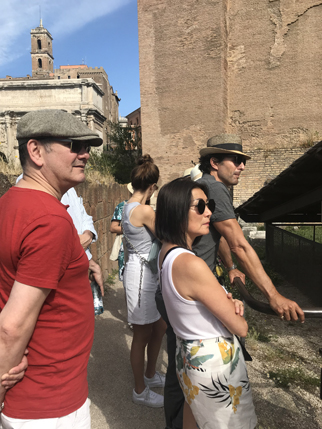 Text and Photos by Isabelle Gioffredi

From the beginning of our trip, Lita, Louise and Steven have all mentioned to us, “Rome has many layers” and the Roman Forum is perfect example of that.

The Forum was the center of the Roman Empire. Back in the day it was the happening place. They had religion, politics, funerals, a senate, and much more. And the thing about the Forum was that almost every emperor would add fabulous structures and keep adding on to it—layers!

Thankfully, we had a wonderful and very knowledgable guide, Dr. Darius Arya, who navigated us through the Roman Forum. He squeeze a lot of Ancient Roman history into only three whole hours; a definite challenge but never the less he was successful!

Looking around at the Forum, we saw a lot of remains of what used to be glorious buildings. Fortunately for us, we had a small morsel of what the facade of the Temple of Saturn would have looked like. It currently stands with only eight iconic columns holding a sliver of the architrave. Like many of the buildings in Rome, it also had an inscription: “Senatus populusque romanus incendio consumptum restituit” which means “The Roman senate and people restored what fire had consumed”. The first line of this inscription is abbreviated throughout Rome as “SPQR” and can be seen on present day Roman buildings as well.

Then we gathered just outside of the Arch of Titus on some steps. Darius had us sit on the stairs around a specific section with circular indentations in it. He asked if anyone knew what it was—it was a game board! It definitely reminded me of a Mancala board. He continued to tell us that there were a lot of people in Ancient Rome who didn’t have jobs, so they would spend a lot of time waiting and gather around senators and ask them if they needed anything. Eventually they would wear them out and earn the senator’s trust and be granted a job—if only it was that easy today!We had a small hike up to see a panoramic view of the whole Forum, it was glorious. You could see the layout very clearly; Temple of Saturn was to the left and to the right in the distance, the Colosseum. If you looked hard enough you could also see the Trajan Column peeking over the Senate House.

As we winded down the hillside and through the Forum, we arrived at our next destination, the Trajan Column. It may be one of my favorite pieces from Ancient Rome. The preservation is exquisite. The column commemorates the victory of the Dacian Wars. Trajan is remembered as a successful emperor who presided over the greatest military expansion in Roman history. He and his wife ashes’ are set inside the base of the column. Apparently Darius had a once in a lifetime opportunity to climb the column and is working on creating an outlet for everyone to virtually climb it as well.

It was a wonderful day with surprisingly great weather and like Caesar, we came, we saw and we conquered the Roman Forum.